Did you know?  For almost 25 years, Christmas was totally banned and removed from the calendar in Albania. To understand why let’s have a look on a tradition linked with the history of the country of eagles.

Unlike many countries, in Albania it is especially New Year that is celebrated with family and not Christmas. Normal, you may say, in a country where 60% of the population is Muslim and only 20% Orthodox and 10% Catholic. However, this is not the main reason, because as in many other aspects of the Albanian society the different religious communities have always been able to share the joy to celebrate together. We must go back in the history of Albania under the communist regime to understand better.

For many years, long before communism forbade it, Christmas was always celebrated by Catholics and Orthodox. Unlike other Balkan countries that follow the Julian calendar, Albania celebrates Christmas on December 25 in accordance with the Gregorian calendar. At the time it was especially for its religious aspect that Christmas was honored. The tradition was that two days before Christmas, small groups of children the « Kolendra », knocked on the doors of Christians, with a small wooden hammer. Announcing by singing to each family the approach of the birth of Christ, they received candies, and more rarely, a bit of money.

Another tradition of Christmas was when all the children of one family gathered together to celebrate « Per ndjesa ». The older of all the children of the family tied a hard-boiled egg to a stick, and the young kids had to catch the egg with their mouths. « Per ndjesa » means forgiveness because the youngest ones asked the older ones for forgiveness for their bad behaviors during the year. The most religious families fasted a week before Christmas. On the evening of December 24, they attended to midnight mass, lit candles in the church and in the houses around statues or icons of Christ. On December 25, we gathered around a meal often accompanied by small donuts that we shared with non-Christians.

However, from 1945, Albania was under the communist authoritarian regime of Enver Hoxha. And became in 1967, the first atheist country in the world. Thus, all religion were prohibited, places of worship were closed and / or destroyed, clergy were persecuted, tortured, and / or imprisoned. Religious practices being forbidden, religious celebrations were also removed from the calendar and replaced by festivities in honor of the communist party. Christmas was then replaced by New Year’s Day. Celebrated on December 31st and January 1st, the New Year’s Day got all aspects of the Christmas  festivities while erasing the religious aspects. Santa Claus was no longer Saint Nicholas, but « Babagjyshi i vitit te ri », word by word, Grandpa of the New Year, and the Christmas tree was then the tree of the new year. Only a few children, those of the elite, received gifts for New Year or a basket containing fruits and dried fruits. Nevertheless braving the laws, many believers celebrated Christmas secretly within families, running the risk of being arrested or imprisoned. For almost 25 years Albania was deprived of Christmas, until 1990 when religion was again allowed and places of worship were reopened and rebuilt. 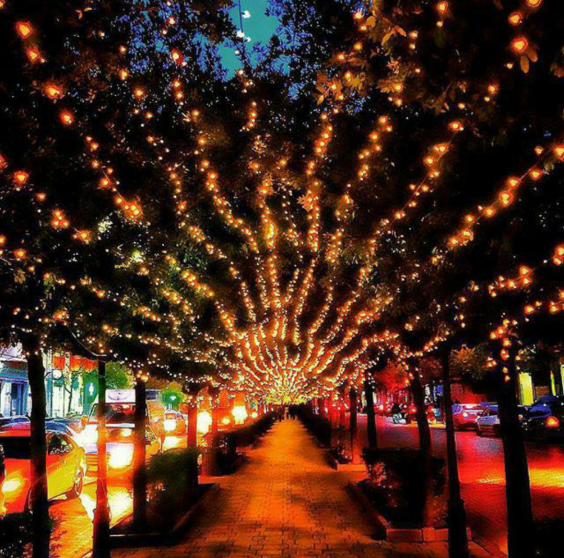 The craze for Christmas – in its commercial form – is fairly recent in Albania, but was once again religiously celebrated by believers since the fall of communism, although most traditions like the Kolendra were abandoned. However, the importance of New Year’s Day lasts after the end of the regime and remains mostly the moment when Albanians get together as a family and share food and gifts. If in recent years the capital Tirana, is decorated with lights and organizes a (too commercial) Christmas market, it is in the city of Korça that celebrate a lot Christmas. Important orthodox center, the city as well as the cathedral are decorated with lights. On the evening of the 24th a big mass is given at the cathedral of the resurrection of Christ bringing together many Orthodox from all over Albania, but also, Catholics and Muslims who come to join their families or friends and enjoy the festive atmosphere. Candles are light up, then after Mass while the oldest go to bed, young people keep the Christmas vibes going with the Christmas party in nightclubs of the city. December 25 is often marked by a lunch where Christians and non-Christians meet to share a meal, pastries and coffee. Because the important thing besides honoring the birth of Christ is to share the Christmas festivities together.